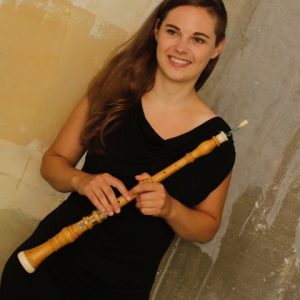 Tatjana Zimre was born in Germany and started her studies in oboe and violin at a young age. She was accepted into the pre-degree program of the Landeskonservatorium Vorarlberg/Austria while still attending highschool and continued her studies of oboe in 2006 with Stefan Schilli at the Mozarteum Salzburg/Austria from which she graduated with distinction in 2010.

Her love for baroque music brought her
to the Anton Bruckner Privatuniversität
Linz/Austria where she began her
studies of historical oboes with Carin
van Heerden. Since 2013 she is
continuing these studies in the
Netherlands at the Conservatorium van
Amsterdam with Alfredo Bernardini and
since September 2015 with Josep
Domènech, under whose guidance she is focusing on the classical and romantic oboes.

She has been invited to perform at major festivals like the Schwetzinger SWR Festspiele and Styriarte Graz (both as soloist), the Händel-Festspiele Halle, the Innsbrucker Festwochen der Alten Musik and Festival Internacional Cervantino.
In the season 2015/2016 she was chosen as the principal and solo oboist of the European Union Baroque Orchestra (EUBO) under Lars Ulrik Mortensen with which she toured Europe extensively.

With her Ensemble „Aria Variata“ that in its core consists of oboe, violoncello and harpsichord she explores the existing repertoire for this instrumentation and performs regularly in Germany and abroad.