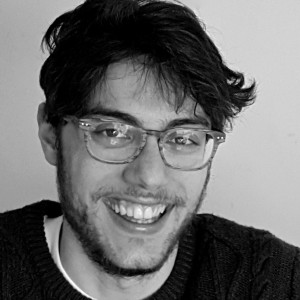 Was born in Brescia on November 11th, 1991.
He starts applying himself to the study of music at the age of six, he dedicates especially to playing the trumpet, given to him, for his birthday, by his father.
He promptly begins performing concerts with Maestro Ligasacchi’s city band.
He afterward enhances the study of other instruments, in particular of the western concert flute, influenced by his brother Nicolò who plays the saxophone, showing a great musical attitude and a remarkable versatility concerning the approach to really different instruments.

Despite the dedication to wind instruments, his desire to compare himself to the music world leads him to attend Maestro Mandonico’s mandolin classes, reinforcing his multi-instrument interest.

At the age of twelve he starts attending bass classes, developing a passion for its rhythmic power and funky bassline.
He’s fifteen years old when he applies to Luca Marenzio Conservatory of Brescia, being accepted to the double bass academic course with highest honours.

He graduates at the age of twentytwo.

While he’s attending doublebass class, he develops a great passion for electronic music and starts studying Sound design and Mixing and Mastering.
He turns up collaborating with many artists, getting into new timbres, and he also begins approaching to electronic synthesizers.

His passion for music, the different influences he experimented in those years and his technical ability bring him to build up a Theremin that he presents, as school project, for his high school diploma.

In 2012 he applies to the conservatory G.Verdi in Milan, for the electronic music class.

During his career he has also being interested in musical production, founding the independent record label “Ogopogo Records”.
At the age of twentythree, just graduated, attends electronic music master at Berklee College of Music of Boston, completing it with the highest honours.

He is the founder of Clockbeats Orchestra.